The latest on Tesla…

In May Business Insider published a heretofore unknown story about Elon Musk paying $250,000 to settle a sexual harassment case brought by a flight attendant on one of his “global warming-fighting” private jets. Yes, the same Musk who soon after the story broke tweeted this:

In fact, following that story’s publication Musk had a complete “Twitter legal meltdown”: 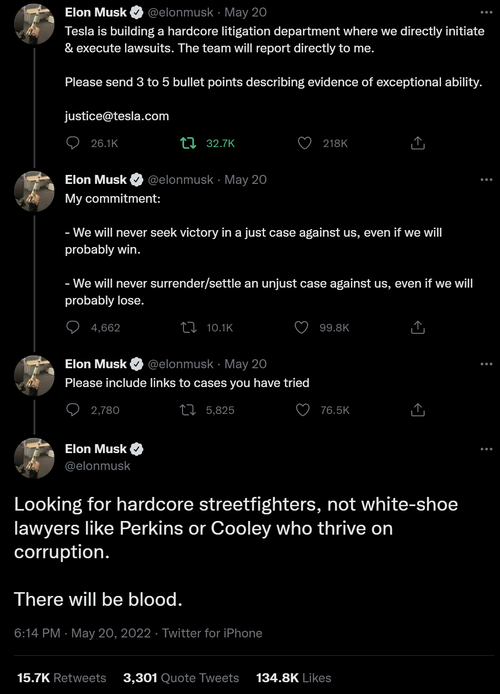 What’s behind THAT??? Could it be that there’s rarely “just one cockroach”???

My comment to any investor who still owns this bubble fraud with that guy in charge: Have fun staying long!

For years I’ve said “Tesla is Blackberry”—the maker of a first-generation version of a product that—once the market was proven—would be supplanted into niche obscurity by newer, better versions; now I can provide a much more recent analogy: Tesla is Netflix. For years Netflix had an absurd valuation based on its pioneering position in streaming media, but once it proved that such a market existed myriad competitors swarmed all over it, and in April the stock collapsed when we learned that not only is Netflix no longer in “hypergrowth” mode but for the first time since 2011 (when it transitioned from physical DVDs) it actually lost subscribers. I believe Musk knows that Tesla is “the next Netflix” (hence his recent “Twitter buying distraction”), with VW, Hyundai/Kia, Ford, GM, BMW, Mercedes, BYD & other Chinese competitors and, in a few years, Toyota & Honda, being the Disney, HBO Max, Amazon Prime, Peacock, Hulu, Paramount +, etc., of the electric car market, stealing Tesla’s share and eventually pounding its stock price down 95% or so from today’s, into the valuation of “just another car company.”

In fact, Tesla’s Q1 deliveries were sequentially nearly flat (just 1398 additional cars, a gain of just 0.45%) vs. the previous quarter and even that was only “achieved” by a sneaky redefinition by Tesla of what “a delivery” is. Yes, the company is chip-constrained, but its competitors (who, unlike Tesla, are unwilling to delete safety equipment or use untested chips to maintain production) are even more constrained, and in fact waiting times are longer for Tesla’s direct EV competitors than they are for a Tesla; for instance, Ford’s Mustang Mach-E is so in demand that it has even halted additional orders for the 2022 model year. (Current annual Mach-E production capacity is around 65,000 for the U.S. & Europe and tens of thousands more for China but in 2023 U.S. & European capacity will expand to 200,000.) The worst thing that can possibly happen to “the Tesla story” will be when its German and Texas plants are fully operational and the subsequent excess capacity stares the world right in the face, thereby ending its myth of “unlimited demand” (especially at current, drastically-raised prices, where the cheapest Model 3 now starts at $47,000 and the cheapest Model Y begins at $63,000); in fact, look for margin-destroying price cuts by late this year or early 2023.

Related:  Even if Musk would let Trump back on Twitter, the former president and Truth Social’s Devin Nunes say he’s not interested

Meanwhile, the “record” profits that accompanied Q1’s nearly flat delivery number were obtained via myriad one-time items, including $679 million of emission credit sales that will disappear over the next year or two as every automaker ramps up its EV sales, a mysterious $502 million reduction in SG&A expense (of which only $140 million was due to reduced stock comp) despite opening new factories in Germany and Texas (what is Tesla capitalizing instead of expensing???) and a combination of FIFO accounting and multiple sticker price increases that allowed Tesla to expense rapidly rising raw materials costs at older, lower prices while selling cars built from those materials at new, considerably higher prices. Adjusting for these factors, Tesla had GAAP earnings for the quarter that were at least $1/share lower than the posted $2.86, and annualizing that realistic $1.86/share to $7.44 means that at May’s closing price Tesla (on a no-growth quarter) had a PE ratio of around 102 vs. an industry-wide figure of less than 10.

Meanwhile, excluding growth in net payables and $993 million in sunsetting emission credit sales, Tesla’s free cash for Q1 2022 and Q4 2021 combined was just $950 million, which annualizes to only around $1.9 billion*. A 15x multiple on this (roughly a 100% premium to BMW’s multiple) would make TSLA stock worth only around $28/share!

Related:  Elon Musk Set To Become Trillionaire By 2024 - But Will He Buy Twitter?

And for those of you who think that Tesla is “really an energy company,” in Q1 “Tesla Energy” had revenue of just $616 million (down 10.5% sequentially) and a cost of revenue of $688 million, meaning it had a negative gross margin. So if Tesla is “really an energy company,” it’s even more screwed than if it’s just a car company!

Meanwhile, many Tesla bulls sincerely believe that ten years from now the company will be twice the size of Volkswagen or Toyota, thereby selling around 20 million cars a year (up from the current run-rate of around 1.3 million); in fact, in March Musk himself even raised this as a possibility. To illustrate how utterly absurd this is, going from 1.3 million cars a year today to 20 million in ten years means that in addition to one million cars a year of eventual production from the new German and Texas factories, Tesla would have to add 35 more brand new 500,000 car/year factories with sold-out production; i.e., a new factory nearly every single quarter for ten years! And what then? Well, then you’d have a car company approximately twice the size of Toyota (current market cap: $229 billion) or Volkswagen (current market cap: $111 billion). If that would make Tesla worth, say, $500 billion in 10 years, discounting that back at 15%/year and allowing for enough share dilution to pay for all those factories, Tesla—in that absurdly optimistic scenario—would be worth just $100/share today, down almost 90% from its current price. (To be clear, I think it’s going much lower than that!)