You will recall that one of the components that allow us to be bullish on the shipping industry is the ability — or in this instance lack thereof — to bring supply back online.

Then there is the inflation in raw input materials used to build these monstrous beasts. This, we have argued, will mean that book values will need to be recalibrated higher. For instance, book values on second-hand cars are being recalibrated higher, so explain to me why the same dynamic won’t play out in shippers, which, by the way, have a much more interesting and strained setup.

Couple all of that with the inability to bring on new ships (we discussed shipyard closures over two years ago now and highlighted the bottoming process), and we believe this will exacerbate these book values, causing many men who stare at computer screens all day to punch their stubby fingers onto the keyboards and then announce to their colleagues that, “Hey, the book values on all this stuff are completely whack and need to be accounted for.” And then those same men will talk to some other men who will finally sit down in board rooms and decide on repositioning their portfolios. It is then that the fill orders will go out.

We think that book values will simply climb and climb some more. This is without day rates climbing and profitability increasing, which they are. So essentially both a balance sheet positive as well as an income statement positive.

I know, I know… we’ve rambled on about this for months now, but it’s interesting to find this information now finally reaching the news cycle.

Tanker owners anxious to rejuvenate their fleets will have to be patient and fork out very considerable sums, new data from broker Gibsons shows.

With record amounts of containerships and LNG carriers ordered over the five last quarters, shipyards are sitting on near-three year orderbooks.

The strong position the yards find themselves, combined with higher input costs such as steel plate and labour, have seen newbuild prices soar over the past year.

Higher profit margins for other ship types means yards in general are unwilling to offer tanker newbuild slots until at least 2025, analysts at Gibsons stated in the company’s most recent weekly report.

On top of that, tanker owners have to contemplate alternative, more expensive forms of propulsion for any newbuilds with Gibsons suggesting a dual-fuel LNG VLCC costs $19m extra, and $13m extra for a duel fuelled aframax tanker.

Tanker orders are very thin on the ground. Sister title Splash Extra reported last week that no crude oil tankers were contracted in Q1 this year. The last time this happened was Q4 1995.

The inability to source prompt newbuild tonnage combined with the changed fortunes of the tanker trades after a terrible 2021 mean the value of the existing fleet is heading upwards.

Input costs are rising everywhere and at the very foundation of our transportation industry and indeed any commercial operation lies diesel.

Related:  GM and Toyota Shut Down

The world is ‘crying out for diesel.’ Product tankers could win big

There has been outright panic-buying of diesel,” said Anthony Gurnee, CEO of product-tanker owner Ardmore Shipping, during a conference call on Wednesday.

Ardmore specializes in MR tankers, a vessel class with capacity ranging from 25,000-54,999 deadweight tons (DWT). Clarksons Platou Securities said that modern-built MRs were earning $49,800 per day in the spot market as of Friday. That’s more than quadruple the average rate for full-year 2021. Clarksons puts the breakeven rate for such vessels at $18,000 per day.

INSW’s product tanker fleet primarily consists of MRs and LR1s (55,000-79,999 DWT). Modern LR1s are earning $50,400 per day in the spot market, according to Clarksons, which puts the breakeven rate for such ships at $19,000 per day. Current LR1 rates are almost quadruple their full-year 2021 average.

Speaking of tankers and the oil business, there is an ongoing structural change in the global refining industry. Europe, North America, Japan, and Australasia have already significantly reduced refining capacity and more capacity shut down is coming.

Related:  GM and Toyota Shut Down

Take Europe as an example. Less crude is being imported (and less to come), but demand for gasoline, jet fuel, diesel, etc. remains the same (if not more), so the shortfall will have been imported from the Middle East, West Africa, or India… and that has to go on product carriers (and the global product carrier fleet isn’t that big).

Here, take a look at this graphic which illustrates the shift. This is refinery closure and capacity additions in 2020 to 2023.

Take another look at those net numbers (in case you can’t see the chart well): 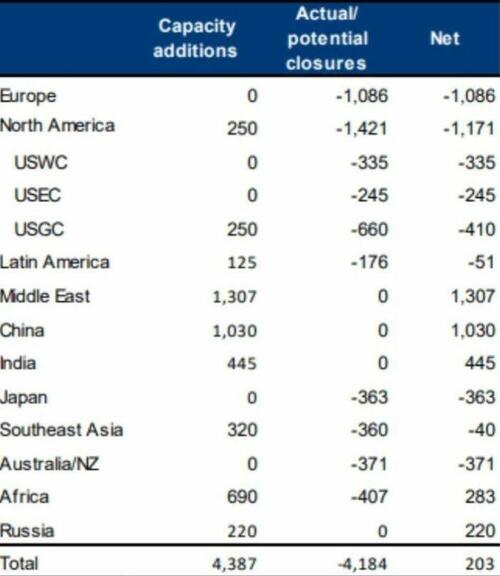 Now, take a look at this… the fleet isn’t going to expand anytime soon (for reasons we explained above). 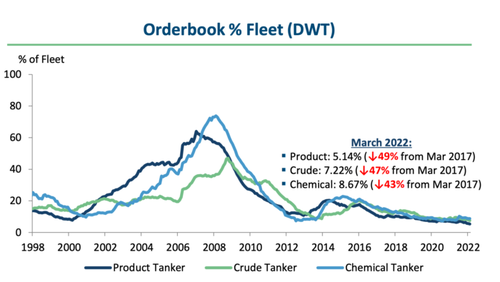 It isn’t hard to invest in product carriers as there are only a few to choose from: