Right now the BOJ has a problem. They have to hold together the bond market, which entails buying unlimited amounts of bonds to hold yield down and keep bonds from collapsing. The geniuses at the BOJ wish to keep the yield on the Japanese government bond at 0%. They will “tolerate ” a 25bp move, but no more.

This is where they’ve promised to bring out the Gatling gun, the howitzer, and even mortars if needed to bomb it back to where it belongs — at zero.

The problem lies with how they go about doing this. It’s not like they’ve got a pile of dough sitting in the piggy bank which gives them this “UNLIMITED” buying power. By definition, if that was the case, then the bonds wouldn’t sell off anyway as folks would be content in the knowledge that they’re backed with… well, the monster piggy bank.

So how do they do it? Like some mystical wizard by conjuring said “UNLIMITED” money, which devalues the yen. 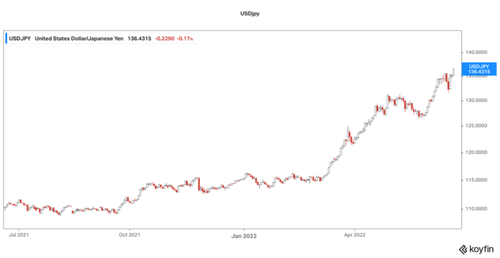 So why is this happening now? Why not a decade ago?

Well, for the last decade-plus we’ve had falling rates across all currency markets and across all maturities of sovereign debt. It’s been a one-way slope. The Europeans, for instance, even took rates negative. In such an environment Japanese Government Bonds (JGBs) never had the same pressure that is now being exerted on them.

As the US jacks rates higher now so the spread between bond yields on JGBs and US treasuries widens. This forces those Japanese investors in both bonds and currency to invest it in US markets.

Why wouldn’t you? I mean, both governments are bankrupt, but one will pay you more than the other. So now we see the JPY moving.

It’s probably worth remembering that this is the second-largest bond market in the world and the third-largest economy on this ball of dirt. This is potentially really, really big.

I say potentially because who the heck knows. Shorting JGBs is known as the “widowmaker” trade in the industry because anyone who looked at the unsustainability of the policy and who subsequently bet against it has had their ass handed to them.

In hindsight, we may look back and understand that the reason it held together wasn’t particular to Japan per se but rather that Japan managed to do what it did purely as a consequence of things that were simultaneously happening in global markets, namely suppression of interest rates by all other major central banks. That now is in jeopardy due to two major things:

So what now? Well, the net beneficiary of all of this is the greenback.

Perhaps it’s no coincidence that the dollar index has broken out to an all-time high. 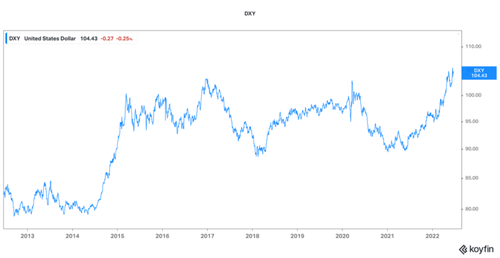 Of course, the JPY is only 13% of the dollar index. Significant but nothing compared to the euro. 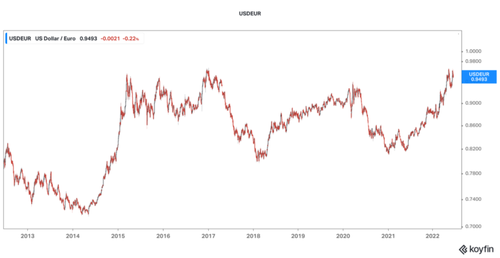 We don’t know for sure but by golly, when we couple the setup discussed above, then throw in the coming emerging market balance of payments crisis, which in our humble opinion is absolutely coming, there is a strong case for the USD to run like the police are after it.

The widowmaker trade (short JGBs) may be on the cusp of becoming the rainmaker trade.

How to play this?

If you’re not burdened with a blue passport (US citizens), you can buy LEAPS (long-dated options) on Nikkei futures.

If the Japanese bond market finally goes and the currency blows out, capital will likely seek safety in equities. There is nothing left after all, and at least equities represent real companies with tangible assets.

Here is some thinking of how one could position:

Nikkei options go out four years (code N225 on Interactive Brokers). However, they aren’t that liquid and the contracts are big (1,000 JPY per point) so they are probably only suitable for experienced options traders with reasonably large portfolios.

They are additionally only available to non-US investors. Sorry, Americans, your government deems it now legal to buy crack (state-dependent, of course), but too dangerous and won’t let you invest in these.

If you’re American, you can simply buy UUP (or call options), which is the dollar index ETF.

There is however another way to invest — Japanese trading houses or Sogo Shoshua as they are known in Japan. You might be familiar with these names: Mitsubishi, Mitsui, Itochu, Sumitomo, and Marubeni. More on this in the Big 5 this week as one of these is more than just a synthetic JBG short play, but it is a potentially fantastic addition to our agriculture and energy sectors.

The chart below is that of the Topix Wholesale Index.

Back in August 2020 (albeit that is when we heard about it), Warren Buffett bought approximately 5% stakes in the five biggest Japanese trading houses. You now have a chance to get in more or less where Buffett got in. See, you can be as smart as the old fella. 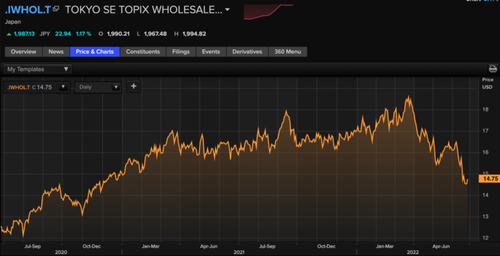