In a war, there are obvious losers: dead civilians… fleeing refugees… maimed soldiers (on both sides)… and even infrastructure. War can ravage anything in its path.

War also has consequences that stretch beyond the battlefield. In the Russia-Ukraine conflict, clear economic impacts include higher commodities prices, the “war tax,” a weaker U.S. dollar, and grounded airplanes.

And then we confront the consequences of those consequences. These less-obvious repercussions of war may take days or weeks to settle in… and sometimes they bleed into other continents and markets.

Loser No. 1: The European Taxpayer

The world is recoiling from the images coming out of Ukraine…

Mothers are weeping over the dead bodies of their children… and it’s brutal to watch.

So it’s not surprising that support for Ukraine and its displaced citizens is growing… Some world leaders are also pushing for Ukraine to become part of the EU.

European Commission head Ursula von der Leyen said the Ukrainian people “belong in the European family”… In late February, Ukrainian President Volodymyr Zelenskyy applied to join the EU. (He expects some progress on that front in the coming months.)

The process is lengthy… It took Poland more than a decade to get its legislative and regulatory systems up to EU standards.

But the benefits are huge… New members receive loads of financial support to improve their infrastructure, government, and overall economic health. That’s why EU entries are expensive for current members…

Related:  Apple’s dirty price move might upset you (it could also make you rich)

When Poland joined the EU in 2004, Europe’s gross domestic product (“GDP”) per capita was (“only”) four times greater than that of its newest member. Over the next 17 years, Poland received net aid of EUR133 billion ($147 billion) from the EU.

But Ukraine is much poorer than Poland. In 2020, the EU GDP per capita was more than nine times greater than that of Ukraine. And that discrepancy will only grow…

The International Monetary Fund forecasts that Ukraine’s GDP will drop by 35% this year. Applying the Poland template, a back-of-the-envelope calculation suggests the EU could provide Ukraine with $300 billion to 500 billion over the next 15 years. (By comparison, the entire foreign aid budget of the U.S. is around $38 billion per year.)

And that’s before the EU pays to rebuild the devastated landscape… or covers the increase in defense spending. Earlier this month, a senior Ukrainian official estimated that Russian forces had destroyed around $100 billion worth of buildings and infrastructure.

Put it all together… and the EU could wind up paying for the Russia-Ukraine War (in more ways than one) for decades to come.

And behind the EU, of course, is the European taxpayer… who will be paying for Ukraine long after the refugees in their living room leave.

Broadly speaking, the stock markets of developed economies trade at higher valuations than those of emerging markets.

Right now, the S&P 500 Index has a price-to-earnings (“P/E”) ratio of around 20. The MSCI Emerging Markets Index has a P/E ratio of about 13. So, for every dollar (or ruble or peso) of earnings, investors pay around 30% less for an emerging market stock than an S&P 500 stock.

Emerging markets are generally riskier… And when doubts intensify about future earnings, due to political instability, corruption, and poor market regulation, investors demand a valuation discount.

Russia’s stock market had for years been one of the world’s cheapest. It has long traded at a market P/E ratio between five and eight.

That’s a huge discount, compared with other emerging markets… due mostly to Russia-specific risks like the massive power wielded by Russian President Vladimir Putin and the weak rule of law in Russia.

That all came home to roost when Putin invaded Ukraine… Most Russian stocks have dropped by 99% and are now untradeable.

And it has created problems for other emerging markets – especially those with authoritarian or authoritarian-like leaders (China, Turkey, India, Brazil) and politically volatile conditions (Pakistan, South Africa).

In other words, most big emerging markets are feeling the consequences of Putin’s war.

Although dirt-cheap valuations may tempt some investors to buy, these investments are extremely risky. Russia’s invasion of Ukraine has alerted investors to the worst-case scenario for these markets. Calculating country risk premiums for emerging markets – now that one of the that-won’t-actually-happen risks has actually happened – is a daunting task.

Few other countries have gone as spectacularly sour as Russia. (If it weren’t the world’s second-largest nuclear power, the conversation would be very different.) But there are still plenty of ways for other emerging markets to falter during this global crisis…

Given the nosebleed levels of uncertainty of current markets… it’s tempting to throw up your hands, sell everything, and hide in a cave.

But there are assets that outperform during periods of crisis… inflation… war… and extreme volatility.

We talk about those assets… and the best way to hold them, in an exclusive report that’s available to you now – for free.

In fact, since 1992, one investment has easily outpaced both stocks and gold, appreciating by more than 1,700%. And if you go back to 1971, a year before the U.S. went completely off the gold standard, the gains are even greater. Click the chart to read more… 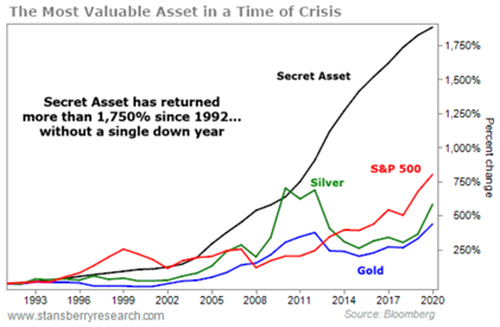