“Sports washing” has become a popular term coined to describe the use of professional sports as a mechanism for brutal regimes across the world to discreetly make lucrative investments into western markets. Former Newcastle United FC owner Mike Ashley sold the soccer club to a consortium of partners whose majority stake was held by the Saudi Arabian Public Investment Fund in 2021. In the same arena of world football, the prestigious World Cup is set to take place in Qatar for its 2022 iteration despite the significant human rights abuses of the Arab nation’s kafala system of indentured servitude and brutal labor practices to build modern stadiums for the tournament which have led to the deaths of thousands of young men who have been fatally overworked.

Soccer isn’t the only professional sport that has sacrificed morality for money being pumped in from state-sponsored initiatives. In recent months, the world of golf has taken center stage of this controversial trend with the advent of another Saudi-backed sporting project. LIV Golf is an appendage of the Saudi Arabian sovereign wealth fund which owns Newcastle United. In an attempt to rival the universally regarded PGA Tour, LIV has enticed some of the world’s greatest golfers to join its ranks, even naming two-time major winner Greg Norman as its CEO. Since its inception, it’s been able to harness the seemingly indispensable funds of the House of Saud to attract some of the biggest names in golf including Masters winners Dustin Johnson, Bubba Watson, and Phil Mickelson along with some of the sports rising stars like Bryson DeChambeau.

However accomplished that field of competitors is, they pale in comparison to the biggest name LIV has been able to ingratiate into its axis. Although he has no experience as a professional golfer himself, former President Donald Trump owns several golf courses throughout the world and is an avid, albeit amateur, player of the sport. Given the amicable relationship he built with Saudi Arabia during his presidency, it should be no surprise that the country’s Public Investment Fund would be able to harness its connections to Trump to advance the interest of LIV. They did so quite easily as Trump’s Bedminster, New Jersey golf course hosted a high-profile LIV event on Thursday. Unsurprisingly, like with all but everything he does, Trump’s decision to host the event was met with vociferous protest. What was surprising, however, was the 45th President of the United State’s response to a hallowed group of people protesting the event to who he once pledged his undying loyalty to.

Related:  The Most Extreme Political Group in US History

The bulk of the criticism aimed at the Bedminster, New Jersey LIV Golf tournament came from families of victims killed in the terrorist attacks of September 11th. Given the irrefutable evidence of Saudi Arabian involvement in 9/11, hosting the sovereign wealth fund of the nation that previously funded the orchestration of the attacks, at least in part, in the very backyard of the families of those victims was an undeniably insensitive and offensive decision which was destined to be met with justified opposition.

When faced with the criticism of those families, Trump’s response stoked the flames of their burning hatred even more as he invoked plausible deniability of Saudi Arabia’s involvement in the attacks of 9/11. “Well, nobody’s gotten to the bottom of 9/11, unfortunately, and they should have as to the maniacs that did that horrible thing to our city, to our country, to our world,” Trump said, invoking one of the many promises he failed to keep in his first term in office as a literal defense of his decision to host the regime at his golf course, coping even further by stating “We’re going to celebrate and money’s going to charity,” Trump went on. “A lot of money [is] going to charity.”

Related:  Trump, China, and the rising reign of terror

In 2016 on the heels of his presidential campaign, Trump himself stated “Who blew up the World Trade Center? It wasn’t the Iraqis, it was the Saudis. Take a look at Saudi Arabia. Open the documents.” Upon being elected, Trump was vested with the very power to do what he requested on the campaign trail. However, his determination to reveal the truth about 9/11 proved to be as fervent as his will to lock up his 2016 presidential opponent, Hillary Clinton.

Preceding Thursdays LIV Golf event at Trump’s course, the families of many victims of 9/11 galvanized in an attempt to urge the former President to cancel the tournament. In a letter to Trump, those families expressed their anguish beckoning him to reconsider his decision to host the Saudi Arabian venture. The letter even references Trump’s previous insinuations in which he acknowledged the role of the kingdom in planning the attacks. Their words fell on deaf ears apparently as the event went underway as planned with Trump participating with his second son Eric alongside professional golfers who have jumped ship from the PGA to LIV for a bigger payday Dustin Johnson and Bryson DeChambeau.

“I think LIV has been a great thing for Saudi Arabia, for the image of Saudi Arabia. I think it’s going to be an incredible investment from that standpoint, and that’s more valuable than lots of other things because you can’t buy that, even with billions of dollars.” Trump said.

Despite his position on the matter, evidence of Saudi Arabia’s role in the 9/11 attacks is abundant. Last September, a 2016 report from the FBI was declassified which revealed numerous connections of Saudi Arabian diplomats and government employees to the hijackers involved in the attacks on the World Trade Center and Pentagon. Most starkly, the report details literally meetings between Saudi diplomat Fahad al-Thumairy and two of the hijackers. While the 2004 9/11 Commission Report wrote “We have not found evidence that Thumairy provided assistance to the two hijackers.” the 2016 report concludes that the Saudi diplomat was tasked with aiding the hijackers himself.

Though the report implicating the Kingdom of Saudi Arabia’s role was kept under the veil of secrecy during the Trump Administration, the very fact it was concealed conveys the former Presidents knowledge of its conclusions. Yet, with that incendiary evidence in hand, his promise to expose the truth about 9/11 still went unfulfilled. For a man who invoked the deep state as his mortal enemy for years, it seems like Trump had no problem working with the intelligence and law enforcement agencies he despised when it came down to perpetuating the state-sanctioned narrative made about 9/11 nearly two decades ago. 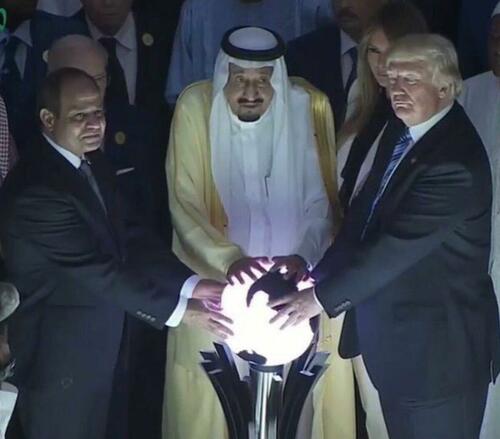 As the presumptive candidate for the Republican Party in 2024, Trump’s political future still holds plenty of promise given the ineptitude of the Biden Administration and the state of disarray that the Democratic Party finds itself in. Fortunately for Trump, the short memory of the American electorate is sure to soon sweep something as inconsequential as a golf tournament under the rug, meaning it will likely have little impact on his possible forthcoming election campaign.

However, the controversial decision poetically sums up the hollow state of America’s political climate as what we once promised that we would never forget has proven to be cast aside time and time again by the very people entrusted with protecting and serving our nation.