In the wake of Friday’s soaring CPI print and Bank of America strategist Michael Hartnett’s latest note (“A Dire Outlook From Wall Street’s Biggest Bear”), it’s worth revisiting the ’70s bear market analogue he sketched out last month, and how that has panned out so far.

As ZeroHedge summarized it at the time,

In our post at the time (That ’70s Show), we drew particular attention to the chart above.

Positioning for an Early ’70s Redux

Take a look at the chart above and note that the best performing sector in 1973/74 was oil, and the second-worst was tech (at the time, the Arab oil embargo in the wake of the Yom Kippur War played a similar role in limiting supply that Western sanctions on Russia have in the wake of the Ukraine War).

[Our] system doesn’t consider the macro picture when selecting its top names. Instead, it gauges underlying securities and options market sentiment to estimate which names are likely to perform the best over the next six months. Nevertheless, that bottoms-up approach often reflects a macro picture, and the picture our system painted with Friday’s top ten names bears a striking resemblance to Hartnett’s ’73-’74 analog:

Related:  Here’s what could trigger another ‘risk-on, risk-on’ bout for stocks and bonds

Our top-performing name so far is the levered crude oil ETF UCO, and our third-best performer is the levered short bet on tech, TECS, which is consistent with the 1973-1974 relative value playbook. 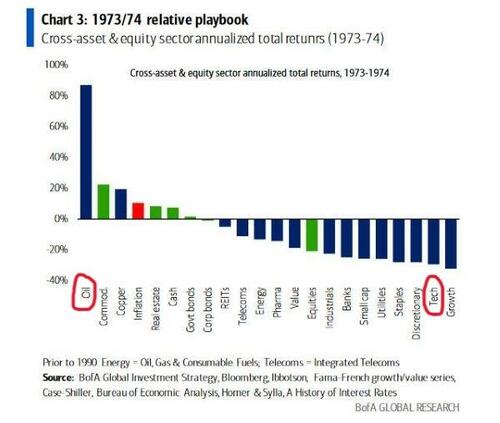 A Word Of Warning

Although oil names have continued their climb, Hartnett warned that resources stocks may get sold off as the market hits its bear market low:

And with the market on its way to said lows, the BofA strategist warns that the most vulnerable assets to own are Big Tech (positioning, secular loser), REITs (inflation hedge), resources (they are in secular bull but at lows investors forced to sell winners), and US dollar (will discount peak yields).

Readers may want to consider hedging their long positions in oil.