Reddit prides itself on its self-anointed label of being the “frontpage of the internet.” Since the website started in 2005, it’s grown to the point of having over 400 million active users and 50 billion monthly views. The gravity of the website’s pull has made it a one-stop shop for people since the site caters to a broad spectrum of interests covered by its excess of 100,000 communities. For many, Reddit becomes their primary source of news, with subreddits like r/worldnews and /worldpolitics being an aggregator of disparate news sources into a homogeneous echo chambers and NPC breeding ground. Its biased news commentary and active censorship efforts are clear, as evidenced by the site’s decision to ban r/TheDonald in the middle of the 2020 election cycle despite the subreddit having over 800,000 subscribers. Yet, the irony of the site’s unabashed approach to censorship is demonstrated by the subreddits it chooses not to ban.

Burdett operated under the personas F_Stop_Fitzgerald and fstopvox accross different social media platforms, with the former moniker being his Reddit username. While Reddit has since banned the F_Stop_Fitzgerald account pending Burdetts’ prosecution it took more sever action against a subreddit started by the user. According to the subreddit, F_Stop_Fitzgerald’s community described itself as a “repository for all my recordings” which included posts including everything from scripted interviews about sexual abuse to posts implying underage sex.

Related:  Cruel to Be Kind

In response to inquiries about Burdetts’ presence on the site following his arrest, Reddit merely re-iterated its position again child pornography, stating: “Child sexual abuse material (“CSAM”) has no place on the Reddit platform,” a spokesperson for Reddit said in an email. “We deploy both automated tools and human intelligence to proactively detect and prevent the dissemination of CSAM material. When we find such material, we purge it and permanently ban the user from accessing Reddit. We also take the steps required under law to report the relevant user(s) and preserve any necessary user data.” However, it is unclear how the content of the subreddit run by F_Stop_Fitzgerald factored Burdett’s recent arrest.

However, other controversial subreddits illustrate the impact of the website’s lackadaisical enforcement of its rules against “child sex abuse material.” Although Reddit dedicated automated resources to detect child pornography, its review isn’t as stringently applied to community groups discussing child grooming tactics. This was made apparent following the exposure of discussions within the community r/TransTeachers which focused on targeting vulnerable students in an effort to exploit their malleablility to manipulate the development of their sexuality. One post on the subreddit fosters a discussion on how to groom a student, ranging from advice on sharing sexually suggestive materials with them and going even further to suggest that the teacher plan a private trip with the student to “explore” themselves. The post gives additional insight into the lexicon used by the groomers, referring to students as “eggs” which they aim to “crack.” 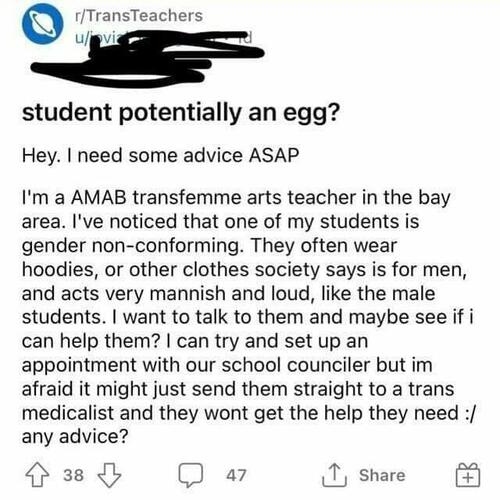 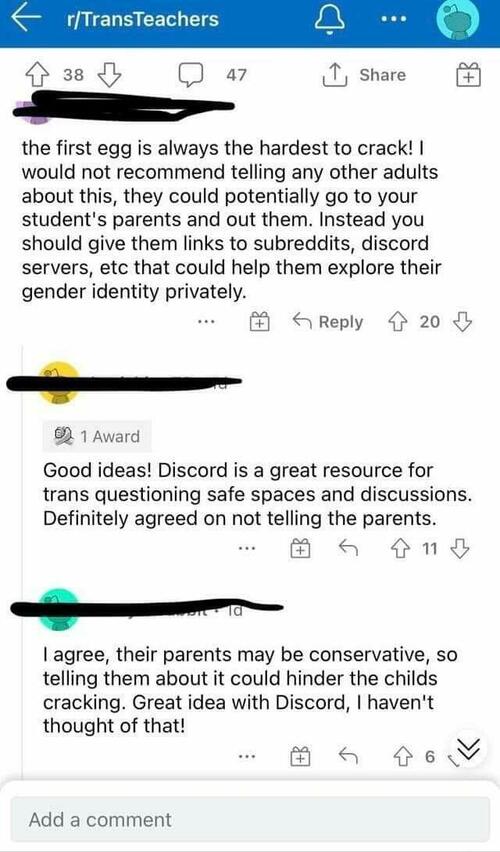 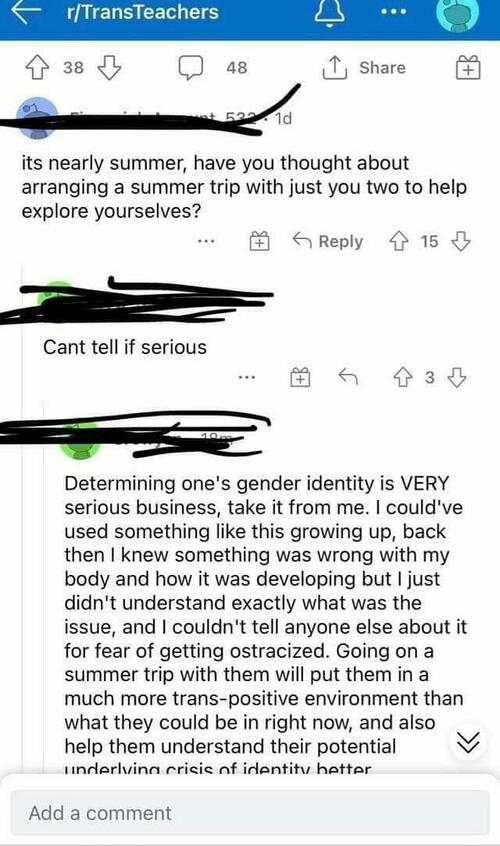 In the wake of that post, the subreddit r/TransTeachers restricted itself as a private community in which moderators must approve subscribers before they can follow the page. The firewall for the page declares that the subreddit is in the process of setting up rules to rebuild itself. There’s no indication that this initiative was taken because of feedback from Reddit itself which doesn’t appear likely given that the subreddit hasn’t been banned or even quarantined.

Unlike Elon Musk, Reddit’s owners have made no vow to promote free speech on their site. Instead, the selective censorship of Reddit conveys the impact it hopes to have on shaping public perception on political and social issues. While other liberal-biased sites like Wikipedia go to great lengths to documents subreddits concerning anything remotely against woke narratives as “controversial,” the list it maintains notably excludes any mentions of other subreddits focusing on content that is much more damaging. While r/Pizzagate, r/TheDonald, and r/MGTOW got the ace from Reddit, subreddits like r/TransTeachers and users like F_Stop_Fitzgerald prove that the website is fine operating as a breeding ground for sexual deviants and groomers.