Inflation is running well in excess of interest rates. Heck, the ECB have them set at negative.

The ECB’s NIRP policy and its policy of buying not only government bonds and housing bonds, but large amounts of corporate bonds (echoed by other central banks in Europe that had similar programs) have created the greatest corporate bond bubble of all times, with even the average euro junk bond yield falling to a ridiculously low 2.1% in November 2017. And still, in September 2021 it was back at 2.25% for an average junk bond. Remember that? We laughed, scratched our heads, and donned our crash helmets… and here we are.

This is now running headlong into inflation. The Germans just printed 7.6%, our cheese-making friends in Holland 11.7%, Spain clocked 9.8%, and Lithuania 15.6%. Thank goodness they don’t include energy in their inflation numbers. Ha!

So what are the real inflation numbers? I don’t know for sure, but if we take a basket of groceries, then take a sample of rent and top it all off with transport costs, we’re well into double digits. Small wonder capital is going into the US where they are raising rates. Sure, they’re sub-inflation in the US too, but at least they’re not at EU levels.

Everything is relative in the world of capital flows.

Small wonder the EUR/USD cross looks like it resembles a downhill ski run.

Even that wretched hag Lagarde is admitting to their failures… 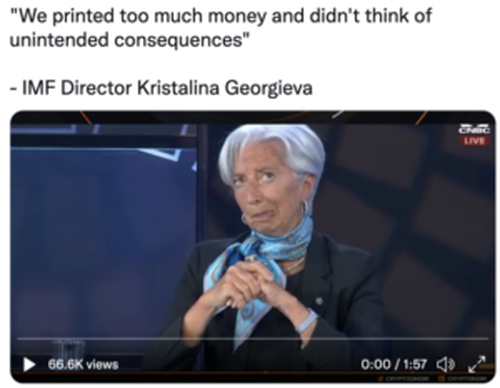 Of course, they’ll blame the inflation on Covid and/or the Russians. Always the Russians.
Many will believe it. No matter, we knew it was coming and from whence it originated. Let the masses believe the unbelievable. So what comes next?

Well, the Europeans are worse off than the Yanks. And so I think the dollar and dollar assets get bid — only because there’s really nowhere left to run to in the currency world that provides sufficient liquidity.

The rot really started post 9/11 when the pointy shoes at the Fed lowered rates from around 6.5% to under 2%. Like sheep, central banks around the world all followed suit. Unsurprisingly this created various asset bubbles. Whouwouldathunkit?

Most notable was the housing bubble, which then burst spectacularly in 2008. As the world looked like it was going to implode financially, the same idiots who created the problem in the first place then went and did it again. They lowered rates to less than 1% and over in Europe rates went negative.

But what we little people think is of no consequence to the central planners. They know best. Always. The decisions made by central banks during and after the GFC laid the groundwork for many of the consequences now known as problems we are facing today.

Well, guess what? Now we have both monetary inflation and supply chain disruptions leading to shortages. Keeping rates at a couple of percentage points is absolute insanity in such an environment as you risk very high inflation levels.

We are already into double-digit inflation in almost every developed country globally (if you don’t use the government’s bullshit numbers and include things like energy and education, for example).

In any event, it is very likely that we see double-digit interest rates within the next year in emerging markets. In developed markets, we will see central banks raise interest rates but never to the real rate of inflation. This will allow them to continue to steal from the average Joe Sixpack who doesn’t understand that inflation is a tax.

The point I want to make or explore is the following. The central planners have been manipulating the cost of money for decades now. This is now failing and about to fail spectacularly. The risk I’m concerned about now is that with this particular tool ripped from underneath them the central planners will turn to a more hard and direct tool. Price controls of goods.

Where to look for it? Funnily enough, not in those crazy wild frontier or emerging markets, but at home. In the developed markets. Why? Because they’re almost all now universally run by neo-Marxist, ideologically-bent “intellectuals”.