I recently dug into our government’s convoluted unemployment insurance system. As is typically true with most government policies, any stone one decides to unturn is ripe with waste and mismanagement.

In 1935, FDR (of course) created the first federal unemployment insurance program via the Social Security Act. The program created a national lending pool for states with insolvent unemployment relief accounts. It began by ‘incentivizing’ states to join the program and of course, is now a required federal tax on all employers.

Called the FUTA tax, it’s levied on business owners directly for each employee they have. The IRS makes clear on its website, “Only the employer pays FUTA tax; it is not deducted from the employee’s wages.” Leaving aside the naive assumption that employees and customers will not share the burden of this tax, I can’t help but laugh at the rationale here: Private employers are, by definition, the greatest force combating unemployment. So let’s punish them with a tax-reducing their ability to hire – and use it to incentivize not working!

During the COVID era, with unprecedented levels of layoffs amid government lockdowns and commensurate increases in unemployment stimulus, many state unemployment relief funds became deeply indebted to the national fund. Though none come close to California’s negative $19 billion balance.

In a world where trillion dollar spending packages are commonplace and each week another billion is sent to Ukraine, it’s hard to grasp what is actually a big number. To put it into perspective, the second most indebted state is New York at negative $9 billion, and here’s a look at how CA compares to its peers: 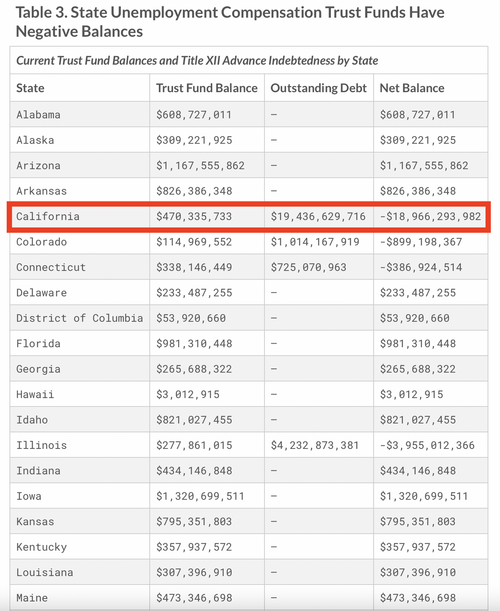 According to the Congressional Research Service, if these debts are not repaid “states may face interest charges and the states’ employers may face increased net FUTA rates until the loans are repaid.” In other words, California business owners (who are already fleeing the state en mass) will soon face even higher taxes. The reality is, however, that CA will never be able to pay back this debt. It will likely come down to higher taxes for ALL business owners and some help from the Federal Reserve.

California has seen a substantially slower job recovery than most of the country (see Los Angeles compared to the broader unemployment rate below).

Maybe… just maybe… massive welfare programs that encourage people not to work and excessive taxes and regulatory headaches for business owners do not actually solve the problem.